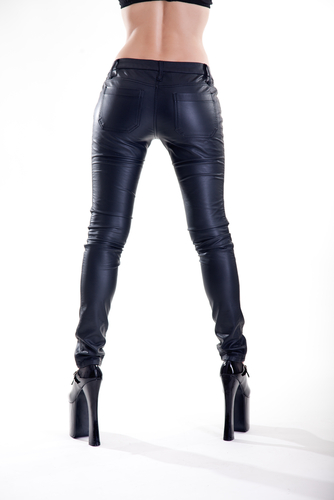 Last thing I needed was her disappearing on me.

She rolled her eyes and started walking toward the door, leaving me standing where I was.

“Legs, swear to God, if I have to go lookin’ for you, we’re gonna have a problem,” I warned at her back. My longs strides got me to her quickly, and when I reached her side, I added, “Pissed me off enough today. Don’t push it.”

Tori let out a dry laugh. “I’ll be doing all the talking in here. Trust me. That’s how this is going to work,” she said, finality in her voice. She stopped in front of the door and reached for the handle.

She was doing all the talking? That’s how this was going to work?

I slammed my hand on the door and prevented her from entering.

“Say again?” I growled, meeting her eyes when she stopped pulling and whipped her head around to hit me with attitude.

“What?” she asked, looking confused. “That’s the plan.”

“That ain’t the plan,” I assured her. “I’m talking. You’re standing there, not wanderin’ off. That’s the plan.”

“Didn’t you say your sister isn’t into boys?”

Tori stared up at me. She grabbed on to her hips and cocked her head to the side, lifting her brows expectantly.

“What about it?” I asked when she wouldn’t elaborate or give me anything else besides looks and sass.

My jaw clenched. I was losing patience. “We covered that,” I bit out.

“Boys are currently hitting on her and not taking the hint that she isn’t interested.”

“Why we’re here, babe. You feelin’ like sharin’ somethin’ I don’t know?”

Tori smiled big. “That’s where I come in.”

“Them not taking the hint.”

I lowered my hand from the door and stood taller. “Not following you,” I shared.

My eyebrows rose. I was understanding her meaning now.

Couldn’t fucking believe it, but I was understanding it.

“No shit,” I murmured, feeling appreciation for what she was willing to do.

“Oh, and just so you know, while I’m handling this, if you wander off, I will not go looking for you,” Tori added. “Keep that in mind.”

I smirked hearing that, saying, “Another lie. You’re rackin’ them up today, Legs.”

“Not lying,” she pledged. “Please, test me on it, because I would love to leave you here, Jamie. Nothing would bring me more pleasure.”

My eyes lowered. I started staring at everything she had going on from the waist down.

Her pants were like a second skin. Highlighting her toned legs perfectly and showing their shape.

Probably purchased them at the same time as that fucking bikini.

I lifted my eyes and watched Tori blink hers rapidly before looking down at herself. “I’m wearing leggings,” she stated, face pinching tight with confusion when she lifted her head again.

She wasn’t understanding why I was digging what she had on.

I stuck my hands into my pockets and shrugged. “Just like the uniform, Legs. On anybody else? Yeah, I’ll agree with you. Those pants aren’t sexy. Probably wouldn’t catch my attention unless the chick wearin’ them was takin’ them off. On you? Different story. That combination makes my dick hard.”

Her eyes went round.

I smirked, liking her reaction to hearing that, and told her, “I got proof to back up my argument if you’re wantin’ to see it.”

Wide-eyed and blushing hot, Tori spun around, yanked the door open, and rushed inside.

I followed behind, laughing. Shit was too easy sometimes.