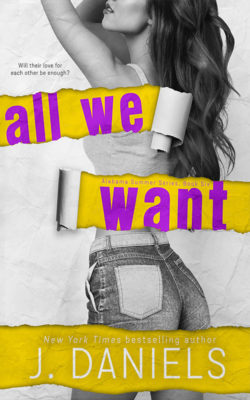 All We Want
Synopsis:

Luke and Tessa Evans are solid.

They’re crazy in love and in this forever, and now, they’re anxiously awaiting the next step.

But when month after month ticks by with nothing but disappointing news, and the stress gets too much to take, their relationship will be tested in ways it’s never been tested before.

When all they want is something they might never have, will their love for each other be enough?

“I hate this table,” I grumble.

“I don’t know. It’s too big.” I pull a slice out of the box and take a bite. Cheese oozes from the end and drips onto the plate.

Luke does the same, watching me in that careful way he’s been doing lately while he chews. It’s as if he’s waiting for me to break.

He wipes his mouth with the back of his hand. “Would you adopt a kid with me?”

I cough mid-swallow and cover my mouth, forcing the rest of my bite down before I choke on it. “Like now? Because of what I said about the table?” I dab my lips with a napkin.

“I’m not tryin’ to have kids just to fill a fuckin’ table.”

“Me either. That’s…” I lean back in my seat. “Sorry. I’m just in a funk today because of the appointment. I don’t really hate the table.” I watch Luke take another bite and set my own slice on the plate. “Why would you ask me that right now?”

I sound defensive all of a sudden, which is completely unintentional and out of my control. It just feels like we’re skipping steps and jumping ahead to the last possible option for us, when we’re literally just getting started. I haven’t even taken my first pill. I’m not due to take it until next week.

“`Cause we haven’t talked about it yet. It could come to that…”

“Yeah, if nothing else works.”

“I’m just wonderin’ where you’re at, if that’s even something you’d wanna do with me.” Hunched forward with his elbows planted on the table, his shoulder jerks. “I’d do it with you.”

My brows lift. “You would?”

He nods and takes a pull of his beer.

His answer makes my heart skip into a faster beat, and I realize Luke isn’t pushing us ahead and giving up on me. He’s simply asking where I stand on something we haven’t really discussed yet. And he has every right to ask me this. I hate how quick I am to think the worst about everything involving us starting a family. I shouldn’t be that way.

“I’d do it with you too.” Our eyes lock as Luke sets down his beer. “I’d totally buy a million kids with you.”

His mouth twitches. “That’ll add up. I’ll need to look for a second job.”

“I’m sorry I gave you an attitude. I’m just stressed out.”

“I wasn’t sayin’ it’s gonna come to that, like I know for sure or something. You know that, right?”

“I know you weren’t. I just… I don’t like thinking about what we’ll need to do if nothing else works for us.” I pick at my napkin, tearing off tiny shreds and dropping them next to my plate. “And I really don’t think we’re going to get to that point. I know it’s my tubes. They’re blocked or something, I know they are. Nothing else makes sense. I have a great uterus, I’ve been told that several times. My hormone levels are awesome. Your sperm is on fucking point.” I look over at him. “Once I do this test and we see what’s going on, Dr. London will go in and fix me and then I’ll probably get pregnant right away. So, really, we’re looking at two and a half weeks. That’s it. Then you can knock me up. We won’t need to adopt a kid. I’ll get pregnant, Luke. I know I will. It’s just my stupid tubes…”

Luke places his hand on top of mine, stopping the napkin torture I can’t seem to quit on my own.

I drop the crumbled remains to the table. “Sorry.”

“Quit apologizing for shit and come here,” he says, his long fingers wrapping around my wrist. He tugs, drawing me out of my chair and guiding me into his lap where his arms envelop me. “Your tubes aren’t stupid,” he says, kissing my neck. “They’re fuckin’ perfect like every other inch of you.”

“Obviously not.” I trace the sharp angle of his jaw with my fingertip and rake my nail over his stubble. “I mean, I’m sure they’re cute and everything because hello, look at this body.”

His chest moves with a laugh.

“They’re just fucked up on the inside. I know that’s what it is.”

Luke’s gaze falls away immediately after I finish speaking. He turns his face into my hand and blinks at the wall.

“What?” I guide him to look at me again.

He stares at me, but it’s as if he’s not really seeing me at all, then he exhales heavily through his nose and gives a curt shake of his head as his arms draw me closer.  “Nothin’. We’ll get your stupid fuckin’ tubes fixed.”

“That’s the plan.” I smile, dropping my forehead against his as my fingers slide down and around his neck.

I feel better knowing Luke agrees with me, that he believes what I believe. Being in this together means everything. Most of the time, I feel isolated and the reason for every single second of our struggle.

It’s easy to feel that way when you know you’re the problem. And it has to be me. We’ve ruled him out.

“But if I can’t get pregnant, I will adopt with you,” I say, our faces close. I lightly kiss the corner of his mouth. “I don’t know if I’ll ever be okay with not being able to give you that myself, but I will go that far if we have to.”

“What’d I tell you about that shit?” he asks, reaching up to cup my cheek. “I’m good with however this pans out, kid or no kid, `cause I got you. Quit actin’ like I’m not happy. You know I am. I told you before—I’ll never fuckin’ understand how I got this lucky.”