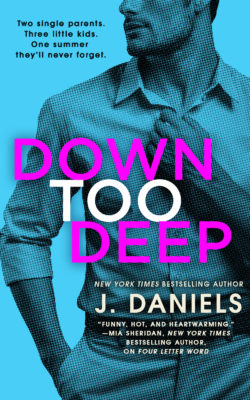 Down too Deep: A Single Parent Slowburn Romance
Synopsis:

Following the sudden death of his wife, Nathan Bell has spent nearly two years burying himself in work and neglecting his biggest responsibility: his daughter. Overcome with guilt, he wants to connect with little Marley, but he doesn’t know how to do it alone. And then Jenna Savage throws him a lifeline.

A single mom of twins, Jenna  is more than capable of taking care of Nate’s adorable two-year-old, and wants to help Nathan however she can. Soon, attachments are made, forcing Jenna and her kids into new territory. And the closer everyone becomes, the more right it feels.

Falling in love forces Nathan to face his biggest fear, and when hearts, both big and little, are on the line, the only thing scarier than needing someone is losing them all.

“What’s going on?” Oliver asked when he reached me. Sweat beaded on his forehead and his cheeks were flushed. “I can keep going. I’m not tired yet.”

“Good. We’re going to play a little touch. I’ll start out as quarterback, and then we’ll switch. Your mom is on defense.”

“What!” Oliver gaped at Jenna when she stepped up beside me. “Mom, really? This is awesome!” He punched the air. “We never get to play like this.”

“Give me your glasses, please.” She took the blue frames from Oliver and then mine when I held them out.

“Are you sure you don’t need these to see?” she teased.

“I gotta give you some advantage. If I’m partially blind, you might have a shot.”

Jenna rolled her eyes and smiled. She set our glasses aside with my clothes and said something to the girls, who were both still hard at work on the castle.

I brought Oliver into a huddle.

“What’s the plan?” he whispered. “I mean, obviously it’s boys against girls.”

“Obviously. We rule, they drool.”

“Just run. I can put the ball wherever I want—I’ll get it to you.”

He cocked a brow.

“You mean, just like the last time I ran for it?”

The kid had a point. “It’s been six years since I’ve played,” I argued. “Cut me some slack.”

That excuse was a bald-faced lie. But Oliver couldn’t know the real reason I overthrew.

Jenna walked back over to us. “Talking strategies?”

I gave Oliver’s shoulder a squeeze, then released him. “Like we need any. Right, O?” I held out my fist and he bumped it.

Jenna looked between the two of us, arms crossed under her chest, appearing amused as hell. “O?”

Smile teasing her lips, she held up her hands in surrender. “Not hating.”

“Let’s do this!” Oliver tossed me the ball. We spread out on the beach.

After taking my instruction, Oliver slid out to my right so he was playing wide receiver. He was excited—it was a position he hadn’t played before and one I was confident he’d excel at. He didn’t have any problem catching the ball. As long as I put it somewhere near him.

I slid my fingers between the laces and faced off against Jenna, who was crouched down, hands on her knees and expression cold. She looked cute as hell.

“Is that your game face?” I asked, smiling.

Her gaze sharpened. “Don’t try to distract me.”

“Is that what I’m doing?” I dropped down and held the ball out in front of me like I was taking a hike. Then I tipped my head toward Oliver. “Do you think he’s having fun?”

Jenna smiled then, all soft and sweet. “Yes. Thank you again for this.”

“Are you having fun?”

Even with the count, I still caught her off guard. Jenna shrieked and lunged forward, stumbling a little as I shuffled back.

I faked left, spun, and cut right, anticipating Oliver’s run, and put the ball into the air before Jenna could touch me.

Oliver caught it and kept running like he was headed for the end zone.

“Ugh!” Jenna pushed against my chest as I grabbed on to her hips, slowing her so we wouldn’t collide. We were both laughing. “I almost had you!” she said, hands gliding to biceps and holding there.

My fingers slid over warm, smooth skin. Her shirt had ridden up during the sprint or it had shifted when I’d grabbed her. I wasn’t sure. But now I held on to bare hips, the shape of them fitting just fucking right in my hands, and it took every ounce of willpower I had not to hold on longer than necessary, which was solely decided by her. The second Jenna dropped her arms, I dropped mine.

“That was awesome!” Oliver hurried back over and tossed me the ball. “Let’s go again!”

We repeated the play. Oliver broke across the middle. I stayed just out of Jenna’s reach, put the ball into the air, and spun around, hands gripping hips while hers braced on my chest, then slid over to squeeze my biceps as we slowed. Oliver caught the ball and took off running.

We touched for only two, three seconds before she pulled away and forced me to do the same. Most guys would want more than that. Some would’ve tried for a different play, hoping for an outcome that allowed for longer contact, hands in other places.

I didn’t want to change a damn thing. I’d run this play all night.