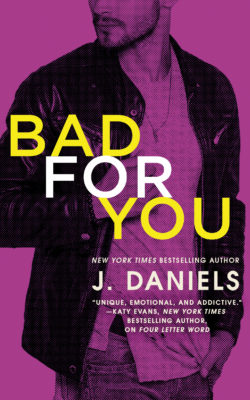 Bad for You: A Grumpy/Sunshine Slowburn Romance
Synopsis:

He didn’t want to be bad. He just didn’t have a choice…

Shayla Perkins isn’t the kind of girl who makes the same mistake twice, especially when it comes to Sean “Stitch” Molina. So when he gives her the world’s biggest rejection, that’s it—she’s done. Until the sexy, silent, unavailable Sean makes Shay a very personal offer. Of course, it still doesn’t mean he’s interested in her. Or does it?

Sean has done things in life. Bad things. And he’s paid the price. All he wants now is to make up for his past by doing good in the present. And no one deserves more good than Shay. Beautiful on the inside and out, Shay is the kind of woman who should be cared for and protected—especially from a man like Sean. He’s tried to keep his feelings for her in check, but a single, reckless impulse pulls them closer than ever before.

Soon the two are sharing their biggest dreams and satisfying their deepest desires. But what will happen if the only way to truly give one another what they want most . . . is to let each other go?

I pulled my bike behind Whitecaps, parked it, and cut the engine. Closing my eyes, I let my head hang between my shoulders.

Barely two hours of sleep last night. My muscles ached. The skin on my hands felt stretched, burned, and broken. My back was fucked up, courtesy of the floor I passed out on like a dumbass, knowing I should’ve quit and gotten some shut eye when I noticed the time creeping up on four a.m., but also knowing I couldn’t quit.

Not until that shit-hole, dump I was now the owner of was good enough.

I thought it would mean something, signing all those fucking papers yesterday, getting my name on the deed, walking out with the keys in my pocket, I thought I would feel…something. Anything.

I’d done it right. Saved up and sacrificed. I fucking did it, the way I was supposed to. The way you’re supposed to do it.

So how come I didn’t feel a fucking thing?

Maybe because the house didn’t look worth jack shit, had more holes in the wall than actual fucking wall space, carpet that was stained and ripped, a roof that leaked, jacked up plumbing, a shoddy heater. The room sizes were shit. The yard was shit. The kitchen was shit.

The house? Yeah, you guessed it. Fucking shit.

But it was all I could afford and I couldn’t wait any longer.

Lucky for me, I could fix it up. I knew how to do everything that needed to be done, and what I didn’t know, I’d figure out. I’d learn. But it was a lot of fucking work, and I couldn’t have this taking a while. It had been long enough. Too fucking long. Meaning this wasn’t going to be the last time I rolled up to Whitecaps feeling like ass. I had a lot of long nights ahead of me. I’d give up sleep entirely if I could.

Fuck it. That house was more important.

I rolled my neck from side to side, stretching it, as I headed for the back door. Fourteen hours on my feet was going to be a bitch after last night.

No way was I passing on another shift though. I couldn’t do that.

The restaurant lights were on inside, bright fluorescent and unforgiving, but it was quiet. Nobody was here yet. Nobody except Nate, my boss. Sometimes, I thought the poor bastard never left.

I rapped my knuckles against his closed office door, noticing the dried compound still caked on my fingers and the back of my hand. Scowling, I picked it off.

I opened the door and walked inside.

Nate sat at his desk with a shit-load of papers scattered in front of him, dressed in a shirt and tie like usual, his head down while he studied some order or whateverthefuck as his fingers dug into his temples.

Not once had I ever walked in here not seeing damn near close to the exact same scene in front of me. I didn’t think there could’ve been that much shit to do when you stayed on top of it the way he did, but what the fuck did I know? I didn’t own a business.

I had a feeling part of it had to do with keeping his mind off his dead wife.

Nate was a good guy. I had mad respect for him, for a lot of reasons, but most of that respect stemmed from our first meeting and the shot he gave me when he didn’t have to. When nobody had to.

And when I didn’t think anybody would.

Arms pulled across my chest and jaw tight, I breathed deep through my nose as I waited for the question I knew was coming.

The guy, Nate—the owner of Whitecaps Restaurant—was reviewing my application. Currently on the second page and scanning the bottom of it. Lingering there. Not flipping to the third page.

Which fucking sucked for me. I was hoping this guy was the type to check work history and experience only.

But now? I should’ve known before I even walked in here.

Never did. Never will.

So, what the fuck was I even doing standing here? I was wasting my time. Nobody was going to hire me.

“I’m gonna go out on a limb here and say you purposely skipped over this question for a reason?” Nate’s eyes came up and leveled me.

We had to be around the same age. I wouldn’t peg this guy for much older than thirty, but he looked beat the fuck up, like he lived twice as many years as I had. And worse ones too, which was pretty fucking impossible.

“You got a record?” he asked curtly.

The word no danced on my tongue.

The truth wasn’t in my best interest. Maybe this guy wouldn’t verify. Maybe I’d get away with it for a few months and make a little money before I had to split.

“I’ll check,” he added, like the bastard could read my fucking mind.

I inhaled a deep breath through my nose and nodded once.

“This a recent thing?” he asked, resting his elbow on the desk.

I hesitated to share, but thought… fuck it. Didn’t matter one way or the other now if he knew my history. No way was I getting hired.

“Just got out yesterday,” I told him. “Can’t really get much more recent than that.”

Suddenly restless, I shifted my weight on my feet. “Is that something you gotta know?” I asked, speaking louder. “It’s not like you left space on there for me to write it down. You just asked if I’d ever been convicted of a felony. I answered that.”

“It’s something I need to know if I’m going to hire you,” Nate shot back.

My head jerked. “You’re still looking to hire me?”

Nate leaned back in chair, letting the application drop to the desk, and cocked his head. “I got Miguel in the kitchen and only Miguel, and he’s leaving Friday,” he shared. “This job has been posted for two months, and you’re the first person to come in here asking about it. You got experience. You seem to know what you’re doing. Okay, so you have a record. We all make mistakes or got something in our lives we aren’t proud of. I’m not excusing whatever it is you did. But I’m also not trying to close this place down while I wait for somebody else to come in here asking to get hired. That can’t happen. So, unless you tell me something I really can’t look past in order to give you a chance, yes, I’m still looking to hire you. Job’s yours if you want it.”

I blinked at the man.

Honest, I didn’t know what the fuck to say to that. I was pretty sure I was hearing things.

I wasn’t offered many chances in my life. Not from people I knew who should’ve given a shit about me. Not from strangers who could’ve. If I wanted something, or if I needed something, which was typically the case, I took it. If I couldn’t get something I needed, I found a way to get it. Either way, nobody did me any favors or gave me any handouts. It didn’t fucking happen.

There were people who deserved good.

I learned early on, I was not one of those people.

Still, I wasn’t stupid. I knew I might not get a break like this again. Even though I was risking telling him something he might not be able to look past, I had to take that chance.

Bottom line: I might not deserve shit, but I needed this job.

At twenty-seven years old, I was going straight. I’d work hard for everything I got from here on out. I’d change my path.

Not because I earned this or anything better than what I got dealt. This wasn’t for me. Nothing was for me. Not anymore.

I wasn’t worth dick.

And I wouldn’t let myself forget it. That was my penance.

Nate brought his hand up to scratch at his chin. His brows lifted. He was waiting.

I pulled in a deep breath.

Yeah… fuck it. Time to confess.

I needed this fucking job.

I wasn’t sure what classified as excusable behavior or not. After I gave him the rundown of everything I’d done, figuring it’d be best to be up front about all of it and not leaving anything out, I expected him to toss me out.

So when he took less than a minute to think his decision over and asked me, “When can you start?” I thought for sure I’d gotten hit one too many times in the head and was just now feeling the effects of those blows.

A weight I didn’t realize I was carrying slid off my chest.

Again, I just blinked at the guy, not knowing what to say.

“Shit,” he mumbled. “My girls are going to eat you alive. That silent treatment thing doesn’t really work with them. Trust me.”

I didn’t know what he meant by that. Didn’t really care either. I was still wondering if he realized he’d just offered me a job.

“Is tomorrow good? Or Friday? I was hoping you could train a day with Miquel…”

He nodded in appreciation.

“I’ll be here tomorrow though. I wanna get started,” I said, keeping to myself how desperate I was feeling.

If I could’ve started today, I would’ve. But he wasn’t suggesting that.

“Sounds good. Be here at eight. We open at ten.” Nate stood and offered his hand to me. I stepped forward and shook it. “I’m not going to regret hiring you, am I?”

“Plus, there ain’t nothing here I wanna steal.”

He stared at me.

“You won’t regret it,” I uttered quickly, stepping back.

Jesus. I was one dumbass comment away from holding the record for world’s shortest length of employment. Just shut the fuck up and leave.

Nate lifted his chin once more as he smoothed out his tie. “All right, Sean. Thanks for coming in. I’ll see you tomorrow.”

I stalked to the door and turned the knob, glancing back once more before I opened it. “Appreciate this. A lot,” I said, my throat suddenly feeling tight. “I wasn’t expecting… just, thanks. I mean that.”

Nate dropped his head into a nod.

I walked out of the office and crossed the restaurant, pushing through the double doors that lead outside.