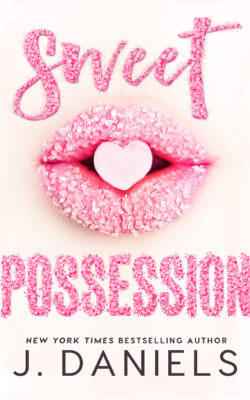 From the author of the Alabama Summer series and the Dirty Deeds series, comes a sexy new companion novel to Sweet Addiction.

Available to read in Kindle Unlimited!

A sassy, in-your-face baker. A panty-stealing, dirty-talking accountant. And a bathroom quickie that changed their lives forever.

Wedding hookups never amount to anything.

Unless that hookup knocks you on your ass.

For Dylan Sparks and Reese Carroll, the big day can’t arrive soon enough. Dylan, stressed to the max from overbearing mothers and last minute preparations, struggles to keep her sanity. As for Reese, he’s fighting to not only keep his bride-to-be safe from creepy investors, but also to make it to the actual wedding day without losing his mind in the process.

Throw in a crazy group of friends, and a bachelor/bachelorette party weekend getaway, and you have a recipe for the sweetest wedding of the year.

Once the two wedding-obsessed mothers exit the shop, Juls lets out an ‘I’m glad I’m not in your shoes’ chuckle and Joey reemerges from the back. I slouch back against the counter top, feeling a Vegas wedding now more than ever. “I cannot wait until all this is over with. How I’ve managed to survive the last six months without being heavily-medicated or drunk off my ass twenty-four hours a day is beyond me.”

“Reese’s mother, though she has impeccable fashion sense, is out of her mind. I am not having a fucking chaperone at your bachelorette party,” Joey states with a shake of his head. Apparently, keeping my future mother in-law away from whatever I decide to do for my last night of freedom is his only concern.

Juls tosses the napkin swatches into the trashcan, which will hopefully be the last time I ever lay eyes on them. She returns to her spot on the other side of the display case. “Speaking of which, what are we doing for that, anyway? You wanna go to Clancy’s like we did for mine? That was fun.”

Joey slams his hand down on the counter, gaining our attention immediately. “For fuck’s sake. What the hell is wrong with you two? Spa days? Clubs that have been played out? I wanna do things that I’ll be ashamed to tell people about. Let me live, damn it.”

“I’m sorry, but is this your bachelorette party? Did Billy pop the question and you’ve decided to keep that information from us?” Juls asks, biting back her smile. It cracks through and she winks at Joey whose mood has suddenly waned, no doubt in response to the reminder that he isn’t engaged yet.

He shrugs dismissively. “Whatever. You bitches can celebrate with watered-down drinks and facials. Just don’t be surprised if I bail on it.”

I slide closer to him and wrap my arms around his waist, pressing my face into his shirt. Tilting my head up, I see him smiling down at me. “I’ll choose something fun. You have to be there; it wouldn’t be the same without you.”

“She’s right.” Juls rounds the counter and mimics my position against Joey’s back. “We’d miss you terribly, JoJo.”

He grunts above us. “You’re lucky I’d do anything for either one of you.” Juls and I both unlock our death grips from him and stand side by side. “But I swear to Christ, there better at least be a cake shaped like a penis at this thing.”

“Chocolate or vanilla?” I ask teasingly.

He smiles, bending down and removing a half-empty tray of pastries from the display case. “Chocolate. I’ve never had black dick.”

Juls and I both chuckle as he walks toward the kitchen, giving us a scandalous eyebrow raise over his shoulder.

“So, I have a favor to ask you.” Juls pulls me into the far corner behind the bakery counter, clearly wanting to put distance between this favor and Joey. Oh, Lord. My best friend doesn’t ask me for many favors but when she does, they’re usually whoppers. A certain wedding dress she made me try on months ago comes to mind. I motion for her to spill it, and she eyes me up nervously. “Umm… so, Brooke got fired from her job at that bank. Apparently, she was caught blowing one of the other tellers during work hours.”

“Yeah, she needs a job and fast; otherwise, she’ll lose her apartment.” My eyes widen, the realization of her favor hitting me. “And since you’re so busy at the shop…”

She fists both hands at her side. “Oh, come on, Dyl. She’s having trouble finding something, and she’s been looking for over a month.” Her face softens and she reaches out to me, pulling my hand into hers. “Please? If she loses her apartment, she has to move in with Ian and me. And that shit can’t happen. I love my sister, but I can’t live with her.”

“What about moving back in with your parents?”

“Not an option. She and my mom would kill each other.” She pauses and squeezes my hand gently. “I really want to help her out.”

Damn it. This has bad news written all over it, but I have trouble saying no to Juls. She’s always been there for me. Always. I groan and her eyes light up. “Fine. She can start Monday. But don’t think I won’t fire her just because she’s your sister.” She pulls me into a hug with an excited squeal. I cringe as Joey strolls through the doorway, coming from the kitchen. He grins, adorably oblivious to the information that will surely send him into a shit-fit. “I should really make you drop this bomb on him,” I mumble under my breath.

We both release each other and Juls spins on her heels, walking over toward Joey and placing her hand on his shoulder. “Don’t freak out.”

His eyes widen with a curious fear. “If I don’t get my penis cake, I’ll disown both of you. Nobody comes between me and my dick-shaped sweets.”

I walk up to him and brace myself for the reaction that is sure to blow the roof off this building. “Joey. JoJo. Bestest friend.” He rolls his eyes as I play with the string on my apron, wrapping it around my finger. “You know how busy we’ve been lately with custom orders and all the spring weddings coming up? It’s getting pretty crazy in here, and I think maybe it’s time I hired another employee.”

“That’s fantastic.” His body relaxes and he glances between Juls and myself. His brows set into a hard line. “Why the hell do I have a feeling I’m about to regret those words?”

“Just remember how much you love us,” Juls says. “And this… addition will allow you and Dylan to spend more time together. The benefits are sure to outweigh any concern you might have.”

I pause, waiting to see if he’ll pick up on the clues that are obvious to me. It only takes him a few seconds; the reaction spreads through him like a wild fire.

He squeezes his eyes closed tightly, reaching up and rubbing his temples with his fingers. “Please tell me this addition is a blind monkey, because they would surely get more accomplished than who I fear you’re about to say.”

“Brooke could be a good addition, Joey,” I state with a mild assurance.

“Are you insane? Why the fuck would you hire that mess?”

Juls shoves his arm. “Hey! She’s my sister, and she’s been through a lot.”

I limply shrug. I’m not at all surprised he’s reacting this way; in fact, I predicted it. But, unlike Joey, I’m willing to give Brooke the benefit of the doubt. And as long as she doesn’t try to molest him like the day before Juls’ wedding, things shouldn’t get too hostile. I gotta give the girl a chance. “She needs a job or she’ll lose her apartment.”

He throws his hands into the air. “Oh, I’m sorry. How is that our problem?”

“She’s on a probationary period. If she messes up, I’ll fire her without thinking twice about it. Right, Juls?”

She nods in my direction before turning back toward my heated assistant. “Right. So, calm the fuck down, JoJo.” She makes a face at him and he issues her his smile, softening her expression. “And a lot of dick? Like you’re one to talk.”