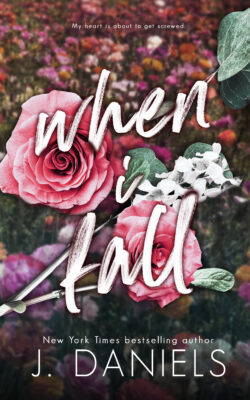 When I Fall: A Fake Dating Friends to Lovers Romance
Synopsis

Available to read in Kindle Unlimited!

For the past nine years, I’ve kept my heart as far away from my dick as possible.

Those two can’t be anywhere near each other. They don’t play nice, and one of them undoubtedly winds up getting hurt.

Not my dick. My dick is good.

The women I take home know exactly what they’re getting from me—sex. Nothing more. At least, that’s what’s supposed to happen. The sweet brunette from Kentucky I set my sights on tonight shouldn’t have been any different. I had her right where I wanted her. Where I needed her. But when my past comes walking into McGill’s pub, the woman in my arms decides to take things to a whole new level, putting me into a situation I never saw coming.

My heart is about to get f**ked. My dick can sit this one out.

Grabbing the six-pack off the floor of my truck, I hit the lock on my key ring and head for the front door.

I need this tonight. I need something to break up my routine of getting off work and then getting off at home. Maybe I can convince Mia to have game night tomorrow too. I love my dick. I’d be devastated if I broke that shit off, but that’s exactly where I’m headed if I don’t find a better way to occupy my time.

I push the door open without bothering to knock. Voices boom from the kitchen, Tessa’s standing out over the others, which isn’t unusual. Everyone’s here already by the sound of it. Good. We can get this much needed distraction started.

I step into the kitchen and set my beers on the table. Ben’s the first person I see.

Standing at the end of the counter, he lowers the beer in his hand as his lips pinch together in a thin line. Tessa and Mia are talking behind him, not having noticed me yet. Ben nudges Luke with his elbow, and the two of them share a look before heading in my direction.

“What?” I ask as they step in front of me. I grab one of my beers and pop the top.

Ben speaks first. “This wasn’t our idea, man. Don’t do anything that’ll get your ass into trouble.”

I swallow, and turn to Luke, tipping my beer at Ben. “What is he talking about?”

Luke nods at my beer, his face just as tense as Ben’s. “You might want to shotgun that. Or put it down and get the hell out of here. We’ll cover for you.”

I whip my head between the two of them. What the fuck? “Is this part of game night? Have Reed try and guess what the hell you two idiots are getting at? Just say it, already. I suck at charades.”

The room goes quiet. I look over Ben’s shoulder, expecting to see Mia and Tessa looking at me, and they are. Both of them are wearing their biggest smiles, leaning on the counter, waving at me like they know something I don’t, which apparently is the running theme of the night.

I open my mouth to ask them what the hell is going on, but it all becomes clear when my eyes are drawn to Beth, standing next to CJ.

Standing with CJ. Together. Looking all comfortable and shit.

Beth fucking Davis. Here, in Mia’s kitchen, wearing the same dress she wore during our lunch together. The same fucking boots on her feet.

Making my chest tight. My dick hard. My mind a fucking scrambled mess.

What the fuck is she doing here?

A hand slaps me on the back of my head. Ben mumbles something about me being an asshole. I pull my attention off Beth and see the agitated glares being directed at me by everyone else in the room. Tessa is looking particularly murderous.

Fuck. I said that out loud?

I look at Beth, her big, brown eyes expanding and pinning me to the wall. Her lips pinched together in distress.

Fuck, I need to explain.

“I didn’t mean…” My teeth clench when CJ’s hand finds her lower back.

I look at him, ready to throw his ass out the nearest window.

He looks at me, lifting his chin into a friendly nod.

I narrow my eyes.

Do I know Beth?

Yeah, motherfucker. I know her more than you ever will.

“Well, everyone’s here. Why don’t we get game night started?” Mia grabs Beth’s hand, pulling her away from CJ and leading her toward my direction.

I could kiss that woman. Always having my back.

“Do you know how to play hearts, Beth?” Mia asks.

Beth looks at me briefly, then shakes her head as Mia pulls a chair out for her. She sits down at the opposite end of the table I’m standing at. “No, I don’t think so,” she says timidly.

I have zero friends in this house.

CJ claims one of the chairs next to Beth. Mia takes the other. I debate on getting the hell out of here, but the second I see Beth staring at me across the table, looking just as fragile as she did standing in my bedroom, letting me know just by those eyes of hers that she had no idea I’d be here, I pick up my six-pack and carry it to the fridge.

Fuck it. What’s the difference between struggling to keep my hand off my dick at home and battling the same urge at Mia’s dinner table?

I take the last remaining seat at the table, putting me directly across from Beth. As Ben stands and deals out the cards, Tessa leans closer to me, chin resting on her hand, looking guilty as shit as the grin spreads across her face.

“Hey, buddy,” she whispers. “You doing okay over there?”

I slowly turn my head, my eyes narrowing. “You know something, don’t you?”

Tessa leans back, pops her gum through a smile, and picks up her cards.

Ben sits in his chair. “All right, we good? Beth, you know how to play now?”

Beth looks down at her cards, her thumb scraping across her bottom lip. “I think so. If I want to run, do I tell everyone I’m going to do it?”

Collective “no’s” fill the room, everyone except me offering their response.

Beth looks across the table, waiting, wanting the answer she hasn’t gotten yet. As if mine is the only one that matters to her.

Fuck. Is it? Is it the only one that matters?

Lowering my beer, I keep her gaze and slowly shake my head. She blinks several times, then looks back down at her cards.

I chug half my beer.

CJ laughs, slips his arm behind her, and rests it on the back of her chair. “No, baby. Don’t tell anyone what you’re planning on doing. Especially if you’re trying to run.”

Blood runs hot in my veins.

“Baby?” I set my beer down and lean forward on my elbows. The room goes quiet. “What, you met her five minutes before I got here and you’re already giving her a fucking nickname? Or is the word Beth too difficult for you to remember?”

Confusion tightens CJ’s face. “What the hell’s up with you?” he asks gruffly, leaning back in his chair, keeping his fucking arm exactly where it is.

I grit my teeth, looking around at the six pairs of eyes on me. One set in particular feeling like they’re holding me by the throat and the balls.

You’re losing it. Losing. It.

“Nothing. Let’s play the damn game.” I lean back in the chair and pick up my cards, setting three aside to pass to Ben and taking the ones Tessa hands over to me. I then toss the two of clubs out in the center of the table, starting the game.

Ben takes his turn, then CJ. Beth seems unsure of what she can or can’t play, looking between her cards, then at the ones in the center of the table, back and forth repeatedly. She tosses a five of hearts on the stack.

“You can’t play that yet,” I tell her, reaching across the table and tossing her back the card. “Hearts can’t be broken on the first trick.”

“Oh. Right, yeah, I knew that.” She tucks the card back into her hand. Her eyes slowly lift to mine. “I don’t have any clubs.”

“You can play anything but a heart on the first trick,” Mia says, popping a grape into her mouth. “After hearts are broken you can play as many as you want.”

CJ leans back and looks at her hand. He sets his cards down. “We’ll play together, okay? Until you get the hang of it.”

I glare at CJ. “I think she can figure it out by herself. It’s not that hard.”

“Relax, man,” Ben mumbles next to me.

“What? We’re playing hearts, not bridge. She doesn’t need anyone holding her hand and walking her through it like she’s a fucking idiot.” I look directly into Beth’s eyes, the veins in my forehead threatening to burst. “Do you?”

She flinches. Her chin trembles. A hand covers her mouth. Her cards hit the table seconds before she’s pushing her chair back. “Excuse me,” she whispers, leaving the kitchen in a hurry.

I reach out to stop her, but a sharp sting cracks against my shin. “Ow, fuck.” I scowl at Tessa. “Did you just kick me?”

She shoves against my arm. “What is wrong with you?”

“Seriously, Reed,” Mia snaps, looking over my shoulder. “That was really rude. I think you hurt her feelings.”

“Because I don’t want CJ hanging all over her? Why the fuck is she even here?”

CJ stands from the table. “What is your problem, asshole?” He moves to follow after Beth.

I get up in his face. “If anyone’s going after her, it’s going to be me. Sit the fuck back down and make sure everyone else knows what a trick is, since you’re so willing to help.”

“You know what, Reed? I’ve never had a problem with you, but right now, I’m real close to knocking your ass out.”

Ben’s at my back. “CJ, let him go after her. He’s the one who needs to apologize.”

“Nobody’s knocking anyone out.” Mia gets up from the table and pulls against CJ’s arm. “I just mopped the floor this morning.”

“I told you women this was a bad idea,” Luke says from his seat at the table. He leans back and takes a swig of his beer, then frowns at Tessa. “You get off on his misery, babe. It’s kinda fucked up.”

Tessa waves him off. “I do not. I’m helping Reed. He just doesn’t realize it yet.”

Ben steps back and allows me to pass. I look over at Tessa. “You’re helping me? How is this helping me?”

She says something behind my back as I exit the kitchen, but I don’t hear it. It probably doesn’t make sense anyway. Whatever the hell her and Mia were trying to achieve with this clusterfuck of an evening, I’ll never understand.

I’m ready to punch a cop. Beth’s hiding somewhere in the house.

© 2015 J. Daniels
Due to COVID19 there may be shipping delays on products from the shop.
+