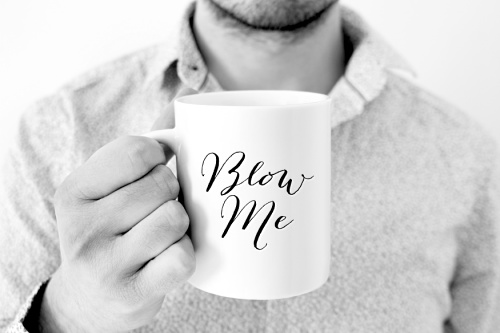 “Son of a bitch!” I yelled, kicking the blanket off and scrambling off the futon. My alarm was set for 8:30. Why the FUCK was it nine sixteen?

“Get up! Get up!” I threw the door open and rushed out of the room, banging on the boys’ bedroom door as I continued to yell. “We only have fifteen minutes before we gotta leave! You guys gotta get dressed! Hurry!”

I was preparing to bust into their room when giggling at my back halted me. Looking over my shoulder, I saw Dominic and Eli seated at the kitchen table, dressed and ready to go.

“Oh, you guys are up,” I said, surprised. Turning completely, I walked over, and getting closer, saw the full plates in front of them, filled with scrambled eggs, pancakes, and sausage links.

Mouth stuffed full and syrup dripping from his lips, he mumbled something I couldn’t make out.

“S-Sean did,” Eli answered this time, drawing my eyes to him but not lingering there, and instead, moving to the kitchen entryway when Sean stepped forward and filled it.

Sean Molina was standing in my apartment, wearing his typical chilly weather uniform of faded jeans and a well-worn thermal, this one midnight blue in color. His hair was tied back at the base of his skull with a few strands hanging in front of his ears, and I would’ve appreciated that look because it was one I liked appreciating, but I couldn’t do that because Sean Molina was standing in my apartment.

“What are you doing here?” I asked him.

He was holding one of the Blow Me coffee mugs I’d bought from Etsy. I’d gotten it because of the hair-styling reference, but it held a double meaning—one I was trying to ignore right now. I could feel the burn in my cheeks, turning them red.

Sean said nothing, just leaned his shoulder against the door frame and stared at my lower half.

Was he checking me out right now? Holy shit.

Then reality struck: I never slept in pants.

Gasping, I tugged on the hem of my shirt enough to cover my thong and slowly backed away, saying, “Uh, let me just… put something on. Be back.”

More giggles erupted from the table.

I thought I caught a smile behind the coffee mug as Sean took a sip, but I couldn’t be sure since I was retreating fast.

“Jesus Christ!” I whispered after reaching the second bedroom and slipping inside. I slammed the door shut and dropped my head against it, groaning.

My brothers saw my ass.

I didn’t really care about my brothers. Yes, it was mildly embarrassing and something I’d probably never live down, but SEAN SAW MY ASS. This was absolutely something I would never live down. I couldn’t take this back. I couldn’t tell him ha! Just kidding! Not my ass! Because it was my ass, and he saw a lot of it. Everything except the crack.

Most of my clothes were temporarily being stored in the closet I kept supplies in, since my brothers were occupying my bedroom. Hurrying over to the sliding door, I pulled out a pair of jeans and a flannel, quickly got dressed, tugged on a pair of socks, and ran my fingers through my hair before slinking back out into the main living area.

If I had the option, I would’ve stayed hidden away and lived out the rest of my life as a hermit, but I didn’t have that option. Furthermore, why the hell was Sean in my apartment?

“Hey,” I said, walking up to Sean, who was still perched in the doorway of the kitchen, drinking his coffee.

He lifted his chin in greeting. “Your coffee sucks.”

“Uh, thanks.” I made a mental note about Sean disliking coconut-mocha coffee. Not sure why, but I did. “What are you doing here?”

“Saw on the calendar they had stuff goin’ on this mornin’,” he began, glancing at my brothers. “Figured you’d have trouble doin’ both, so I’m here.”

“You’re helping me out again?”

I stood a little taller, staring back at him and disbelieving the words he’d just uttered, even though I’d heard them loud and clear.

He was helping me out again.

Sean took the time to glance over that calendar yesterday when I was merely pointing out a day’s worth of activities, and after doing so, came to the conclusion he’d help without me asking him for it, knowing his help would make my life easier.

He was right. This wasn’t a big deal. This was a huge deal.

“You made them breakfast,” I said, pointing out the other part of this amazing act of character. “A hot breakfast. That’s so important. I wanted to do that, but I think there’s something wrong with my phone. My alarm didn’t go off.”

“Your alarm. It went off.” He tipped his chin at the table. “Already had breakfast going, they were up, so I shut it off and let you sleep. I had it handled.”

“You shut my alarm off because you had it handled?”

“What time did you get here?”

I couldn’t blame him. Those pancakes looked amazing.

“E, did you let Sean in without letting me know he was here?”

I ignored King Attitude and kept my focus on Eli, who finished chewing up his bite, swallowed, and wiped his mouth off with the back of his hand.

I stepped closer and told him, “I know he’s not a stranger or anything, but you really should’ve woken me up first. Okay? Please, wake me up first next time.”

Eli slouched in his chair and nodded.

“What’s the problem?” Sean grated at my back.

I turned to him. “Nothing. I just think he should’ve let me know you were here.”

“You got an issue with me helpin’ you out?”

“Then what’s it matter?”

“Well, for starters, I would’ve put on pants,” I snapped, bringing my arms across my chest and cocking my head.

Sean’s mouth twitched. Even with his beard, I didn’t miss it.

“You know you got a mole on your butt, Shay?” Dominic teased.

Eli snickered. Dominic was laughing under his breath. Sean didn’t make a sound, but his mouth kept twitching.